« Back to regular news view
Your printed page will look something like this.

Black Lives Matter - A Message from our CEO

As a company we have a very clear vision.

To Connect and Organize the World's People. Do Good.

With the turmoil tearing through our country as the realization of systemic racism and the physical danger black people are facing, as the CEO of Tendenci, I want to add to the dialogue. While these opinions are being typed by me, I do hope every member of the Tendenci team shares these values.

I believe in this:

I'm a graduate of Texas A&M University, I have *not* served in the Military but I am an Army brat. Many in my family have served and I grew up on Army bases. So as we say at TAMU "Let me tell you a Story Ags!"

The Survey Questions from "Brats: Our Journey Home".

Years ago I filled out a survey for a movie that was in Production/Screenwriting stages called "Brats: Our Journey Home". The survey had tons of questions about my experience growing up as an Army Brat. One question was on racism in the Army.

I responded, in all seriousness, to the question that If I thought Racism was no longer a big problem in America. Literally, I said "no, I don't think  it is."

Truly I can't make this up.

The next day, my phone rings. It's either the producer or the director on the line. I'm like "what? huh?" Obviously I wasn't expecting that. We exchange small talk and then he asks me "So Ed, you really don't think Racism is that big of a deal in America?"

I repeated my answer, perhaps a bit more timid, but still I replied with "no, not really. I just don't see it."  (stay with me and keep reading please....)

The producer asked me, and I am paraphrasing as it has been a while, the following:

Director: "Ed, can you name one place in the United States of America in 1958 where a black man could tell a white man what to do and they had to do it unconditionally?"
Me: "um... an Army base?" (Ding ding ding... the lights start to go on....)

Director: "Yes. That's it Ed! One place! You grew up on bases all over the United States and overseas and YOU never saw how large a problem it was and still is. Because you are white, even though racism was still there on base to a lesser degree, it wasn't visible to you. YOU grew up a white kid in a non-political environment and thought nothing of having a black family join y'all for dinner. That's how you were raised."

"Have you ever heard the saying that 'you don't care about the color of a man's skin if he's sitting in a foxhole with you?' You have because your Father served in Vietnam."
Me: "OK.. you make a damn good point. I learned to ride horses from Master Sergeant Willians (Ret), and played basketball, and worked out with the GIs at the gym, and I guess I just never really thought about it."

I'll stop there. I was wrong back then. And I promise you, if you think racism is not a big issue in America to this day, you are wrong. There ARE things we can do to change it. And we must.

I have contributed, but more importantly, I need to recommit to ACTS of change. Not words or hashtags.

I believe this image from twitter user x says it far better than I can, so I will let these words speak for themselves: 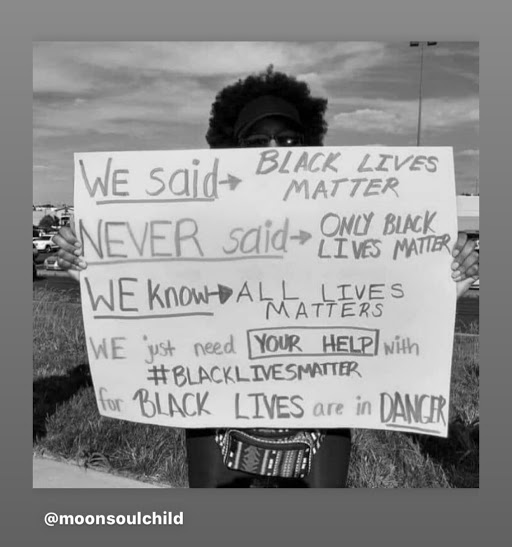